Many Poling Group customers have worked with Alexander Hasbach, President of ASM-Hasbach. But they may not realize that Alexander continues as the fourth generation in a Hasbach family tradition of machine design and engineering excellence. 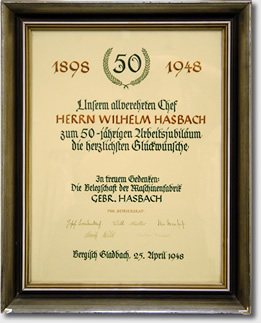 Under Alexander’s father, Werner, the Hasbach tire testing machine was brought to the next level with the appearance of electronic drive controls to replace the previous dead-weight operation. Hasbach also expanded its offerings to include tire high speed and characteristic testers.

Hasbach’s first interaction with the Poling Group occurred in the late 1990s when they collaborated with Akron Special Machinery and CTI to develop a high speed uniformity testing machine to evaluate tires, in a production environment, for a global tire manufacturer.

When Hasbach became an official part of the Poling Group in 2001, the addition of its laboratory tire testing machines fit in perfectly with PG’s existing line of production testing machines. The Hasbach knowledge base built from the development of key R&D equipment also enhanced Poling Group’s expertise in tire characteristics and dynamics.

The Hasbach name and family tradition have brought a unique global perspective to the Poling Group in the design, manufacturing, and customer service areas. And that tradition continues with ASM-Hasbach's Rolling Resistance tester, which provides testing needed to produce the fuel efficiency rating for Europe's EC 1222/2009 tire labeling requirements.